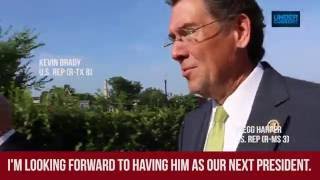 "Moral Sewage": Trump Is The Opposite Of Christianity

It wasn’t me who called Donald Trump’s campaign “reality television moral sewage.” The person who said that was none other than Russell Moore, the very conservative president of the Southern Baptist Convention’s Ethics and Religious Liberty Commission. And it isn’t just things like calling women fat pigs, commenting on women based on how they look, or talking about the size of his penis in a nationally televised debate. Donald Trump’s entire philosophy of life is predicated o

No Contradiction For Democrats: Assume Nothing And Fight To Build A Big Wave

The problem for a campaign and political party where you seem to be way ahead is the tendency to get cocky and begin to coast. There is great danger in such a moment, especially for a party in need for a historically big victory, as Democrats are right now. Now is the time to work with even greater urgency and aggressiveness to win this campaign, and hopefully win it by a big enough margin that we crush Trumpism and throw it into the dustbin of history. But right now we are a

Trump And The Christians

One of the most ironic things about the 2016 campaign is the willingness of the Christian conservative world to so eagerly embrace Donald Trump. This painfully long self-defense of this support is one of the latest examples, and the Jerry Falwell, Jr. speech at the Republican convention praising Trump is another. Sandy Rios from the far right Christian group American Family Association (AFA) leapt to Trump’s defense on the Khan family controversy by saying, “From my perspecti