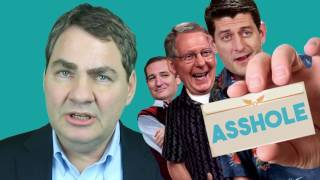 Elizabeth Warren Said It, Bernie Ran On It, Trump Won On It

Wake up, progressives. Republicans are stealing your message and winning on it. Democrats have got to be more than just the "anti-Trump" party.

Democrats and the progressive movement need to figure out how to balance two very different but equally important imperatives: keeping the heat on Trump for all the egregious scandals of his presidency, and making sure voters and the media fully understand the consequences of the terrible policies being enacted while no one is paying attention because of the Trump distraction machine. As one of the people who fought the last big impeachment fight and played a modest role in h

When I was a Junior in high school, I would race home every afternoon to watch the Watergate hearings. They were mesmerizing, especially when the bombshell news broke that Nixon had fired the Special Prosecutor investigating Watergate, as well as the Attorney General and Deputy Attorney General for refusing to fire the Special Prosecutor in the first place. The Saturday Night Massacre created the biggest firestorm in American political history, and it wasn’t long before Congr

The Republicans are at it again. The Freedom Caucus said they would come on board if they made the ACA repeal bill even crueler than before, ending protections for people with pre-existing conditions. But that will make Frankenstein's monster even more unpopular than before- and before it only had the support of 17% of the American public. Seems tough to get worse than that but the Republicans keep trying. We can still beat this awful bill, which comes up for a vote this week