At the Edge of the Abyss, Democrats Need a New Strategy

The Democratic talking points after losing two more House special elections, including one in Georgia that many people thought they would win, were partly right. All four of these congressional races were in deeply red districts, and we did considerably better than past Democratic candidates in those districts had done. If we over-perform based on past numbers in the competitive districts on the map in 2018, we’ll have a good year. But with Trump’s numbers in the toilet, lots

The Movie Monster That Won't Die: The GOP Plan to Kill Health Care

While most of us have been distracted with the soap opera that is the Trump presidency -- I call it "The Daze of Trump's Lies" -- Mitch McConnell has been behind closed doors working hard to kill coverage for 23 million Americans and screw over seniors in nursing homes and sick little kids. That is no hyperbole, folks: Medicaid as we know it is going away. This is the movie monster that won't die, the evil creature from the black lagoon that keeps coming after you. After all 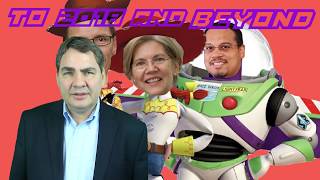 In the wake of Trump's decision to pull out of the Paris Accord, Mike offers some insights on how Democrats can regain power in 2018 and beyond.